Who the Clix? Annihilus 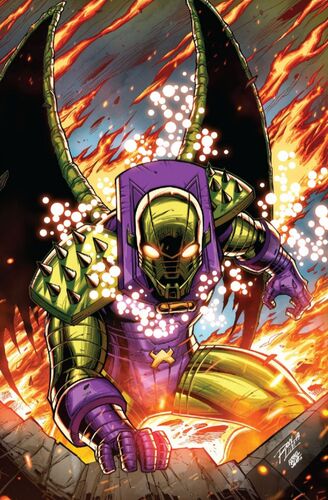 Annihilus and the Fantastic Four first cross paths during Sue Richards' pregnancy. The FF enter the Negative Zone seeking anti-particles to treat strange complications Sue is experiencing due to her exposure to cosmic rays. Annihilus' minions capture the heroes, but the team is able to escape and steal the Cosmic Control Rod in the process. Once Reed is able to siphon some anti-particles from the rod, they return it to Annihilus and return home.

Some time later, Janus the Nega-Man arrives in the Negative Zone and challenges Annihilus. Annihilus defeats Janus handily and tries to force Janus to lead him to Earth. Janus seems to die in a resultant explosion when anti-matter and matter collide. This does not deter Annihilus, who consistently tries to reach the Earth, only to be defeated time and again by the likes of the Avengers, Spider-Man and the Human Torch.

Realizing Franklin Richards' potential, Annihilus abducts the child along with the Fantastic Four, Medusa, Wyatt Wingfoot and Agatha Harkness. Annihilus attempts to activate Franklin's latent powers and transfer them into himself only to be defeated by the Fantastic Four. Annihilus later aids Mr. Fantastic against the Mad Thinker.

Blastaar, another warlord in the Negative Zone, steals the Cosmic Control Rod and leaves Annihilus to die. In desperation, Annihilus tries to escape to the Earth but is defeated by the Avengers and Fantastic Four. Blastaar revives Annihilus and in appreciation, Annihilus steals the Control Rod back. Always desperate to expand his borders, Annihilus attacks Asgard only to be repelled by Odin. Annihilus later kidnaps a sleeping Odin in an attempt to siphon off the Asgardian's power only to be defeated by Thunderstrike. Blastaar and Annihilus then join forces along with another warlord of the Negative Zone, Syphonn. When confronted by Adam Warlock, they sacrifice Syphonn in order to escape.

Annihilus leads the Annihilation Wave, a fleet of Negative Zone battleships into the universe. He claims that the universe is expanding into the Negative Zone, making him the rightful ruler of this territory. He soon is able to destroy the Kyln and planet Xandar while gaining powerful allies such as Thanos, Tenebrous and Aegis. The Annihilation Wave is able to defeat both Galactus and the Silver Surfer, who are then strapped into massive machines on Annihilus' ship. It is then that Annihilus' true intentions are revealed: he intends to create a massive bomb powered by cosmic energy that will destroy both the Universe and Negative Zone, leaving Annihilus as the sole survivor. Drax is able to rescue the Surfer and both then free Galactus, who is able to destroy the Annihilation Wave by himself. Nova battles Annihilus and kills the fiend, who in turn is reborn as an infant with all of his memories intact.

During the War of Kings, Darkhawk and Talon invade the Negative Zone only to discover infant Annihilus and his Cosmic Control Rod in the care of another warlord, Catastraphus. Catastraphus has been using the Control Rod to stunt Annihilus' growth in order to prolong his own rule. Talon kills Catastraphus and tells Annihilus to remember that he had spared the young tyrant's life.

Young Franklin and Valeria Richards journey to the Negative Zone and have to be rescued by their uncles. During this adventure, they learn that Annihilus' forces have been rebuilt and the only thing holding them back is a civil war with Blastaar's armies. The Thing is able to get the children back through the portal but Johnny seemingly dies going nova in order to stop Annihilus' forces from invading Earth once again. Some time later, Reed opens a viewiing portal to the Negative Zone and threatens him with the Ultimate Nullifer. In return, Annihilus brandishes Johnny's torn uniform.

Annihilus uses incredibly advanced surgery to revive the Human Torch and forces a, seemingly powerless, Johnny to battles as a gladiator. Annihilus offers Johnny his freedom if he will activate the portal from the Negative Zone, but Johnny refuses. It is in this arena that Johnny meets the Inhumans Light Brigade, also trapped in the Negative Zone.

One of the last surviving members of the Council of Reeds contacts Annihilus and offers to open a massive portal to Earth. Unknown to Annihilus, this alternate Reed is attempting to start the War of Four Cities and is only using the Annihilation Wave as a pawn. Still, Annihilus agrees and prepares a massive invasion force.

Johnny learns of this and rallies the Light Brigade to help him in an uprising. Johnny is able to gain control of the Cosmic Control Rod and becomes the leader of the Annihilation Wave just as the portal opens. He leashes Annihilus and keeps him as a servant while revealing himself to his family and helping to battle a Kree Fleet and the Mad Celestials.

After Johnny reunites with his family, a rebellion demanding free elections breaks out in the Negative Zone. Ever the hero, Johnny allows it. He is shocked when Annihilus wins with 14,980,336,901,214 write in votes.

Some time later, Annihilus arranges for the abduction of Bruce Banner. Annihilus is still trapped in an infant form and has been using a mech for when he appears in public and hopes to learn how to grow to a more impressive size by studying Banner. This works and the AnniHulkilus is born, leading a massive invasion of the universe that ravages countless worlds and killing most of the Earth's heroes. With some help from above all, Thanos and Adam Warlock are able to travel back in time and stop the invasion from ever happening. Adam Warlock then transforms Annihilus into a bug that Thanos proceeds to step on.

Some time later, Annihilus resurrects and seems to be his normal self again, kidnapping and enslaving shipwreck survivors. Using the Nega-Bands, he is able to open a portal to the Earth and intends to destroy it with a massive energy cannon. The Avengers are able to stop him, destroy the cannon, and steal the Nega-Bands.