Who the Clix? Amazo 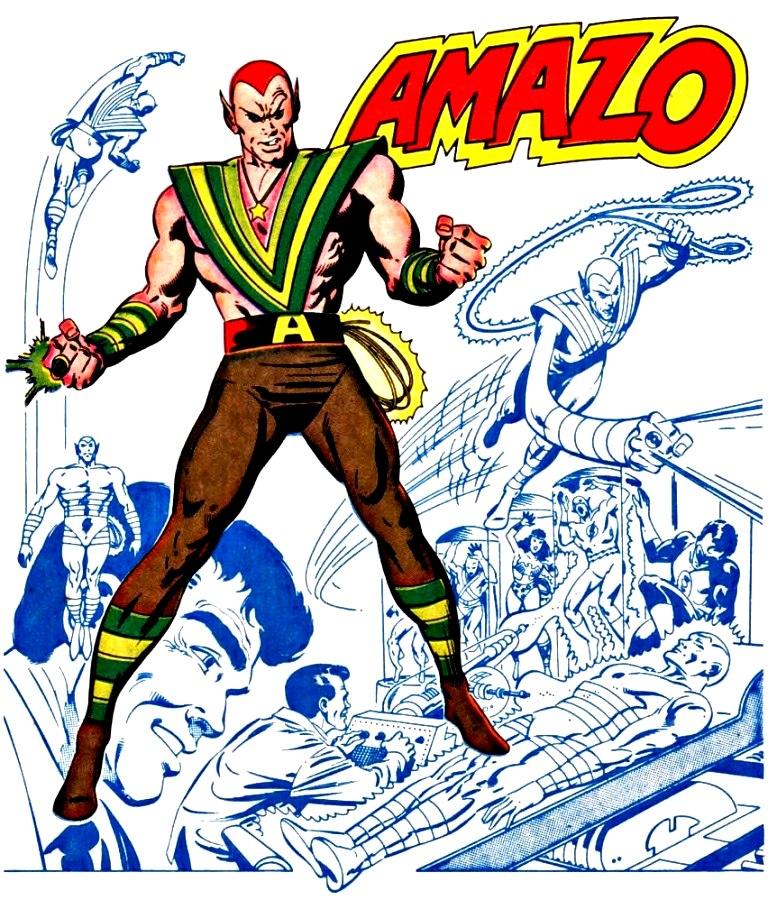 Professor Ivo becomes obsessed with immortality and to that end creates Amazo. The original League, consisting of Green Lantern, Flash, Aquaman, Wonder Woman and the Martian Manhunter, learn that their powers have been drained and used in numerous threat of animals with long life spans. Trying to solve this mystery, the League battles and is defeated by Amazo. Ivo reveals that he has discovered the secret to extending his life from studying the creatures and is almost able to erase the League's memories of the encounter. They manage to defeat the android and store his lifeless body in their trophy room.

Amazo is re-activated twice to help the League regain their lost powers. He is also accidentally re-activated when red sun radiation reaches the earth. Superman and Amazo have a massive battle that includes time travel with the Kryptonian proving victorious. The Key also manages to activate Amazo and attempts to use him in a plot only to be defeated by the League.

Ivo later activates Amazo and uses the android against a weaker team of the Justice League. Martian Manhunter and Aquaman ultimately defeat the android and rescue the League. A new Amazo model is activated and battles the team the Conglomerate. After facing them, he begins searching for Ivo and finds the hero Aztek. Aztek is able to reason with Amazo and stop his rampage. Amazao later battles the Resurrection Man before being destroyed.
Amazo is later pulled from the time stream by Hourman, who wishes to meet his “ancestor.” Amazo attacks the hero and copies the powers from the Worlogog embedded in Hourman's body. Amazo then calls himself Timazo and begins a new rampage while manipulating time. Hourman is able to strip Timazo of this power and hurls him back into the timestream.

Another version of Amazo is able to absorb the powers of the Leage on a purely conceptual level and is able to defeat over two dozen heroes. The Atom then advises Superman to announce that the team is disbanded. This uses the android's own programming against it and without a League to battle, Amazo simply shuts down. A few other Amazos are activated and used in attacks against Metropolis and Gotham.

Ivo attemps to create a human/android hybrid version of Amazo that results in a younger version of the villain. Before Ivo can program it, however, an earthquake affects the lab and awakens the creature. This young Amazo believes it is actually a philosophy student named Frank Halloran and begins to date a girl named Sara. One of the original Amazos finds Frank and reveals his true origin. In an attempt to resist its programming, it becomes a hero under the moniker Kid Amazo. The truth about its existence is too much for Kid Amazo, however, and he is slowly driven insane. He confronts Ivo and discovers that Sara is Ivo's daughter and was dating him merely to monitor him. Kid Amazo eventually confronts the League and Batman realizes that he is copying not just their powers but their personalities as well. Using this, Batman creates dissension in the ranks of the League that the android subconsciously copies which results in a conflict in its logic and thus its destruction.

Next, Ivo downloads Amazo's programming into the body of the occasional Justice League member, Red Tornado. The JLA battle an army of Red Tornado clones until they discover that Tornado's real body is meant for Solomon Grundy's mind. This conversion is interrupted which allows the Amazo programming to take control and attack the League. Vixen is ultimately able to destroy it. Red Tornado is built a new body but the Amazo programming is also installed in it. Amazo uses Red Tornado's body to again battle the League until they teleport him into the gravity well of the red star Antares.